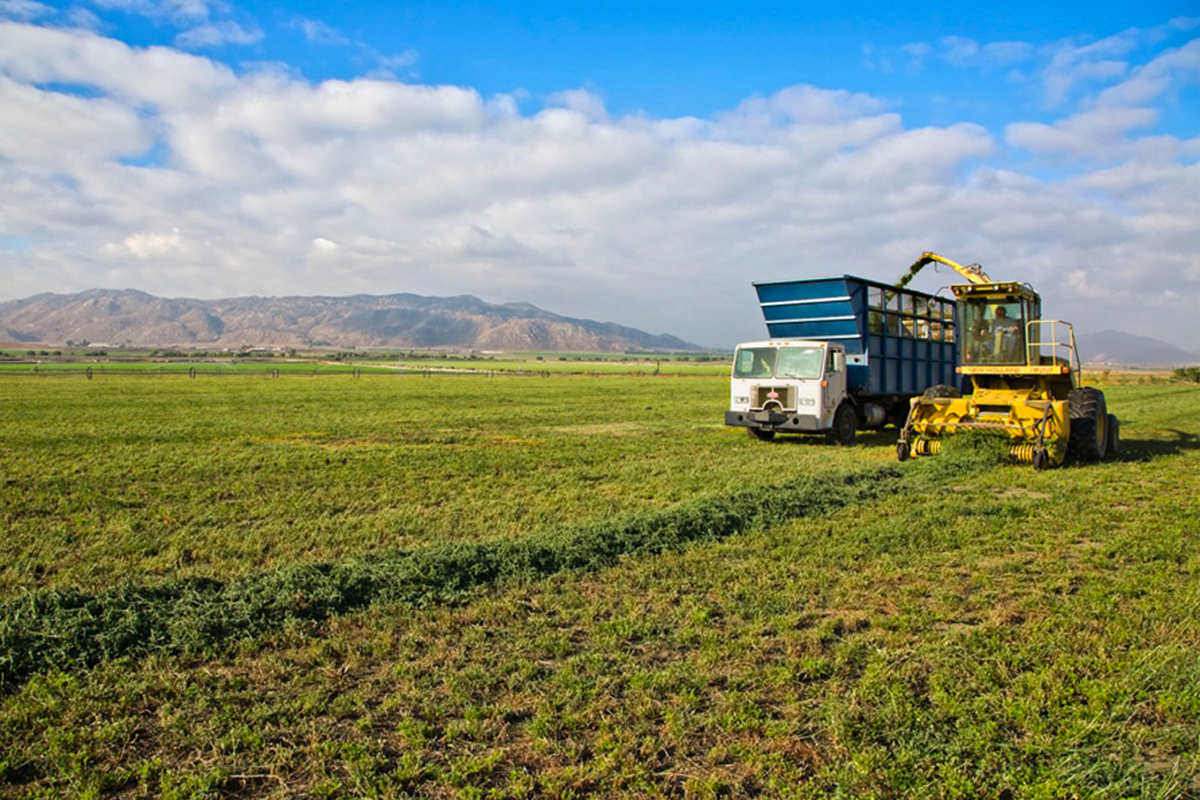 From Grass to Glass

From Grass to Grass

How many consumers have stepped foot on the land where their food is produced? If the U.S. Environmental Protection Agency’s statistics are any indication, not too many. Only 2 percent of Americans live on a farm, yet the food, feed, and fuel they produce nourish and power the nation.

Los Angeles-based photographer Mark Leibowitz visited Stan, Brad, and Bruce Scott, owners of the Scott Brothers Dairy in California’s San Jacinto Valley. The farm’s cows produce high-quality milk, frozen yogurt, and sour cream, and the family-run operation is quickly becoming known for its innovative technologies as much as its products. Stan and his sons, Bruce and Brad,—third- and fourth-generation milk producers—are vanguards of sustainability.

Room to Roam: The Scotts’ 1,100-cow farm is located in an arid region of the country, presenting challenges for raising animals that require lots of water. An average milk cow makes about six and a half gallons of milk every day, but she will only produce if farmers keep her cool, hydrated, and well-fed. The Scotts have engineered agricultural and technological solutions to water availability.

To produce the hay and grass for their feed mix, the Scotts cultivate alfalfa, rye, and Sudan grass. Because the San Jacinto region gets less than 13 inches of rain per year, the Scotts are especially conservative with their water. This center-pivot sprinkler irrigates the Scotts’ fields very precisely, using between 10 percent and 30 percent less water than traditional systems.

The Scotts have recently tried no-till farming, which eliminates the plowing that normally happens between one crop’s harvest and the next one’s planting. No-till techniques keep the soil from losing essential nutrients and can even capture carbon from the atmosphere over time. Skeptical at first, the Scotts have been pleased with higher-than-average yields on their untilled land.

Here the Scotts are effectively mowing their 700-acre lawn, turning grass into high-value feed for their cows. Their on-farm vehicles use diesel purchased off the farm, but the Scotts are developing a demonstration biomass-to-fuel-generation project over the coming year.

Some of the farm’s irrigation water comes from this clay-lined lagoon. The lagoon stores the dairy’s waste water until it can be reused across the farm. Engineers certify that dairy waste water is stored safely and does not seep into the groundwater supply.

The lagoon also provides a welcome habitat for local wildlife. Most winter mornings, the Scotts spot ducks and geese floating on the glassy surface.

Rather than drawing on a local well for irrigation, the Scotts make clever use of reclaimed water from the Eastern Municipal Water District , which is pumped across the farm through bright purple pipes.

EMWD board president Joseph Kuebler nominated Scott Brothers for a regional award for the partnership and explained the environmental benefits.

“This is the kind of teamwork we need to encourage,” he said. “The dairy gets a reliable water supply for irrigation, the drawdown of high-quality groundwater is minimized, and residents can expect more from their local water supplies for domestic water purposes.”

Five years ago, the Scotts worked with Clear Skies Solar to install solar panels on their commodity barn roof. The Scott Brothers farm is an ideal site for this technology since San Jacinto gets 342 sunny days a year. The panels supply one-quarter to one-third of the farm’s energy needs.

This year’s drought across the American Midwest caused the price of corn to skyrocket and forced many farmers to rethink their feed mix. The Scotts work with a nutritionist to develop a recipe that meets the cows’ needs and capitalizes on the local ecology and national feed prices.

Contrary to popular wisdom, milk is not just a key source of calcium. Milk is also a major source of protein in Americans’ diets, and as any dairy farmer will tell you, it takes protein to make protein. Cows find protein in white cotton seeds (left); distillers dried grain, a by-product of corn ethanol production (middle); and rolled corn (right). The Scotts mix these ingredients with other recycled or by-product components including almond hulls, bakery waste, and yogurt.

The Scotts’ cows are regular locavores. By producing almost three-quarters of the grass and hay its cows need onsite, the farm reduces its carbon footprint and transportation costs. And the Scotts are convinced that their cows appreciate the freshness.

Bruce said, “The cows love this stuff. Lush, green grass is like candy to them.”

After eating their fill every morning, the cows come inside the dairy’s double herringbone milking parlor for the first of their twice-daily milkings. The milking parlor is equipped with high-efficiency lights, a pump with an energy-efficient variable-speed motor, and a plate cooler—an ingenious system of coils that facilitates a passive heat transfer between the just-pumped, 101-degree milk and water at room temperature. The heated water is in turn used to rinse the cows’ udders before milking and then stored in the lagoon and used to irrigate crops.

At the end of the day, the Scotts pump all the milk they’ve collected into a shiny tanker. Unlike a gas-guzzling refrigerated truck, this milk tanker is a passive insulator—like a giant thermos—keeping its contents at a cool 37 degrees.

In the darkest hours of the night and early morning, Brad or Stan navigates the tanker one hour up the road to their creamery in Chino, Calif. And while we consumers are still sleeping, the milk the Scotts and their staff collected less than 24 hours earlier is transformed into the dairy products we’ll soon purchase in restaurants and frozen yogurt shops across the country.